If winter doldrums are starting to get you down, think non-stop excitement in Las Vegas. Get into the swing of things 24/7 as you head to the stunning Strip and the hear the sounds of slot machines hitting the jackpot. Enjoy dining in upscale restaurants, indulge in world-class entertainment and hike the awe-inspiring Red Rock Canyons.  There’s so much going on in Vegas, you’ll run out of days before you run out of things to do!

All You Need is LOVE 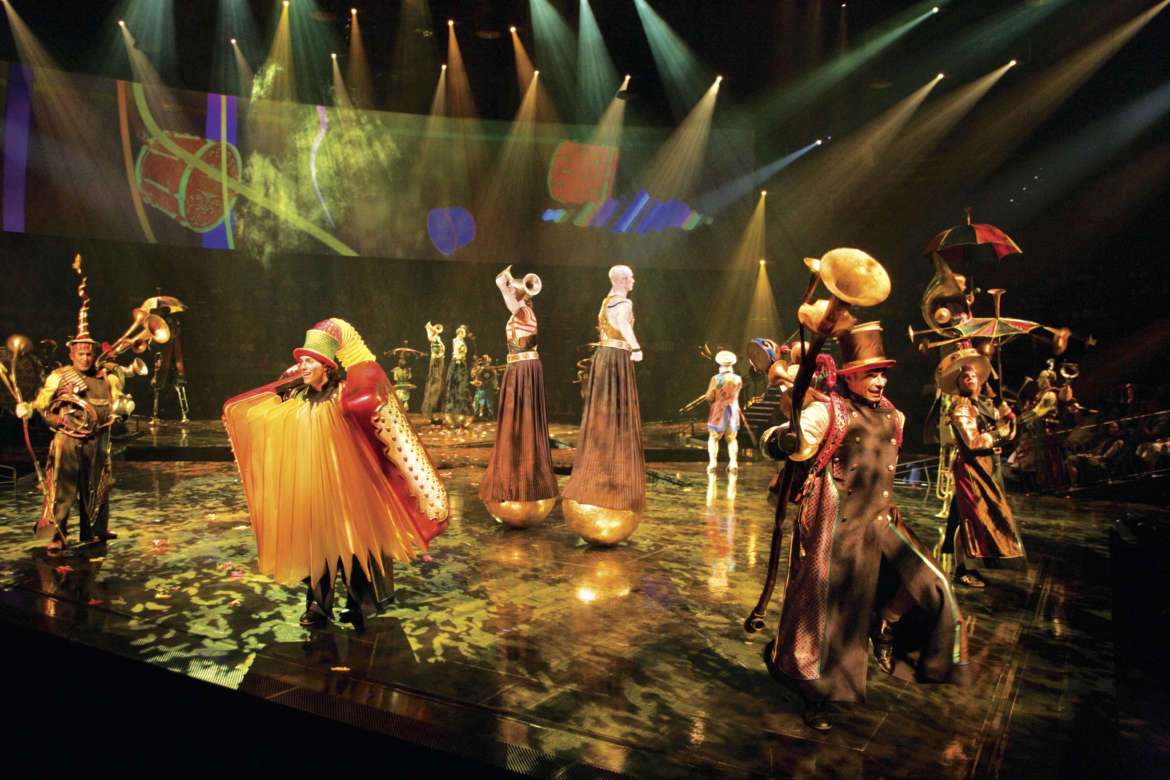 There’s a reason the Cirque du Soleil shows are known for their innovative, jaw-dropping performances throughout Las Vegas. They’re simply indescribable, a combination of awe-inspiring acrobatics and special theatrical sets, all set to the world’s most popular music. This is the second time I saw The Beatles™ LOVE™ at the Mirage and the show was just as mesmerizing with the timeless tunes of the Beatles. Considered a rock ‘n’ roll poem by its creators, this marvelous show has also won three Grammys. The show’s been playing since 2006, but has been updated with new acts, new technology, new costumes and new choreography, making it more spectacular than ever!

Set to the backdrop of the psychedelic ‘60s, LOVE explores political issues of the times, yet the messages remain universal. The show features a cast of 68 talented acrobats who perform in this unique and magical experience. Join the more than 9 million fans who have “LOVED” the show. Be sure to buy the CD so you can enjoy it later. Some have said the show is the closest anyone can get to being in the studio with the band!

Check out all the Cirque du Soleil shows in Las Vegas, including Zumanity, ONE (about Michael Jackson), O, KA, R.U.N and Mystere.

Frederic Da Silva’s Paranormal Mind Reading Magic is Out of this World!

Da Silva’s Paranormal show certainly defies description, but will leave you with a burning question, “How’d he do that?” I got called up on stage and I still have no idea what happened. But it was sure fun! With warmth, humor and style, Da Silva brings his magical “Paranormal Mind Reading Magic” to The Magic Attic in Bally’s. You will be spellbound by his performance, filled with mystery, magic, hypnosis and mind-reading. People who have no connection to each other are called up on stage and in an instant, can read each other’s minds. And that’s just the beginning! Voted Best Mentalist in Europe, Da Silva can predict what audience members are hiding in their pocket, stop a watch at the time that guests secretly visualized and even figure out the name of the person an audience member is thinking about. Shows start at 4 p.m. Check out the line up in the Magic Attic, available online at Caesars.com, at any Caesars Entertainment box office or call (702)777-2782

Save a Bundle with the Go Las Vegas All-Inclusive Pass

It’s easy to save big with the exciting, newly revamped Las Vegas Pass.  Use it for admission to more than 20 different shows as well as tours, attractions and activities and live the life of a true rockstar. Choose from all-in-one two, three or five day passes and get access to Grand Canyon tours, high-speed NASCAR experiences, pool parties, helicopter flight, Cirque du Soleil shows and much more. Passes are valid for consecutive days, but don’t go ‘live’ until you first use it. Here are just a few of the deals:

Enjoy a bus tour to the West Rim of the Grand Canyon, laugh hysterically at the world-famous Blue Man Group, or take a breathtaking helicopter night flight over the stunning Las Vegas Strip. Other high-flying attractions include the world’s tallest observation wheel, the High Roller, and the 490-feet high VooDooZip Line. See more of Vegas with the a two-day ticket to the hop-on, hop off sightseeing bus. One of my favorite spots was The Eiffel Tower Experience at Paris Las Vegas. The views were exquisite and the guide showed me how to take the best pictures!

Most people don’t know Las Vegas has foodie tours. But I’ve discovered it’s the best way to sip and savor your way through town.

Sample the hottest new restaurants on the Strip and downtown Fremont Street. The Lip Smacking Foodie Tour lets you taste signature dishes from award-winning chefs at four to five restaurants. Get a guided tour between stops packed with insider information on Las Vegas. Choose from Lip Smacking Boozy Brunch (weekends), Afternoon Culinary Adventures, Savors of the Strip and Savory Bites and Neon Lights, which even includes a helicopter ride over the glittering strip. Optional beverage package with paired signature cocktails is available.

Our tour of Savors of the Strip started with a stop at Bardot Brasserie for King Crab Caesar and Roasted French Chicken Dip. Then we moved on to Julian Serrano for a taste of tapas and paella, which were sensational. At Estiatorio Milos, we tasted tomatoes like you’re never had before in a Greek Salad, followed by octopus and Milos Special fried zucchini. Before dessert, we stopped at RetroSpecs and saw their unique eyewear, some worn by celebrities. The night ended with eye-popping desserts at Wolfgang Pucks’ Cucina like tiramisu, limoncello panna cotta and cremoso.

“Our VIP dining tour lets guests experience many of Vegas’ best restaurants in one outing and try multiple signature dishes from each one,” said Contursi. Guests enjoy VIP immediate seating with signature food and drink set down immediately, while chefs offer greetings and cocktails are prepared tableside,” said Contursi. “We are rated the Number One Food Tour in Las Vegas.”

Come to Your Happy Place!

This immersive pop-up experience at Mandalay Bay is great for families who want to take lots of fun selfies. The guide will take you through the maze and you’ll want to snap a few in each of the 12 rooms, including really high heels, a magical garden, confetti, inflatables and more. This is the “Most Instagrammable pop-up in America.” Have fun!

Pink Adventure Tours Take You to the Great Outdoors

We got picked up at our hotel in a Pink Jeep for a 3-hour tour of the Red Rocks. Riding in their super-comfy Tour Trekker was a lot of fun as our tour guide drove us out to the serene Mojave Desert. Famous for its signature red hues, we oohed and aahed at the unique red rock formations, ancient pictographs and ruins of past civilizations. Encompassing about 197,000 acres, the area features a wide range of ecosystems, wildlife and multicolored views. Look for desert tortoises in a protected habitat at the Visitor’s Center. Pink Adventure Tours also offers a variety of other destinations from Las Vegas including Death Valley, Grand Canyon, Hoover Dam and more. It was an experience we will long remember.  (800) 873-3662

February 10, 2018 Stephan Martin Entertainment 0
Spread the love
Spread the loveLas Vegas has become home to the music residency, and why not? You have glorious venues, hotels galore and most of the time it is simply an elevator ride down and you are […]

May 24, 2016 Stephan Martin Restaurant Reviews 4
Spread the love
Spread the loveA cold hand-crafted beer, comfort food with a gourmet flare that is served in an environment that will always make you feel at home and that makes for a pretty fun afternoon with […]