LA Theatre Works, a non-profit organization dedicated to the arts, says it all in their mission statement: “To record the most significant and important stage plays from the American and World canons and to make these recordings available worldwide.” LA Theatre Works invites the public to hear and see well-known actors perform classics by icons like Shakespeare and modern plays by playwrights like Lynn Nottage and then record the results.

Today, LA Theatre Works has the largest library of recorded plays in the world — over 500 audio productions, both free and for purchase, available to the public. In response to the current COVID-19 pandemic, they are offering 25 audio recordings of significant stage plays, each performed by leading actors of stage and screen and free to educators worldwide. LATW’s “Setting the Stage for Learning” initiative is designed to help teachers enhance distance learning during the crisis — as well as classroom learning when schools are again open.  In addition to the current initiative, LATW has remained busy in the community, offering weekly two-hour radio shows on public radio stations nationwide, worldwide streaming and through their podcasts. LATW also broadcasts their show daily in China, where they have over 15 million listeners a week, and they broadcast weekly on KCRW Berlin in Germany. All of these offerings can be accessed on their website, www.latw.org. In the midst of this never-ending activity is Producing Director and CEO Susan Loewenberg, who kindly agreed to this interview in March 2020.

WHAT IS LA THEATRE WORKS, AND HOW DID IT START?

“Originally, six theatre artists and I started the organization. Eventually I agreed to head it up. It was around 1972 when a group of artists, actors and playwrights associated with the Mark Taper Forum in Los Angeles began to do workshops in Federal, State and County prisons. We called ourselves Artists in Prison. We created plays with inmates and the general public was allowed inside to watch our productions. At one point, we even arranged for a group of furloughed inmates to perform live at the John Anson Ford Theater.”

“It was 1977 or 1978 when the group received a grant from the National Endowment for the Arts and changed our name to LA Theatre Works. By 1980, we had begun to produce professional theatre, including several award-winning world premieres. In 1985, a group of well-known actors, including John Lithgow, Marsha Mason, Amy Irving, Hector Elizondo, Ed Asner, Helen Hunt, Julie Harris and Richard Dreyfuss, approached LATW to become their producers. We agreed, and our first project was to record Sinclair Lewis’ “Babbitt” for radio station KCRW. It took 18 months to record the book; all 34 actors in the company participated. The recording was 14-and-a-half hours long and was released on Thanksgiving Day in 1986. It was a huge success and got great reviews. We had to follow up on that success.”

HOW DO YOU ARRIVE AT THE FINAL RECORDING FROM START TO FINISH? HOW DO YOU PICK YOUR CASTS?

“Depending on how difficult the play is, we either perform in front of a live audience or, for the more difficult plays, we record in a studio. For the live performances we record four or five times in front of audiences, using state of the art technology. There are actors with microphones and live sound effects. I take notes on every performance. The first time, I watch the actors. But after that, I never look at them again. I focus on listening. I put on my headset and take notes, then decide which performance is better for each section of the play. For example, perhaps the first scene was better on Saturday, but the second scene was better on Sunday. We have people in continuity who make sure that every word is correct; everybody makes notes, and the editor looks at all the notes. We edit three times. It takes two to three months from performance to the finished product.”

“In order to cast our plays, we have a group of both high profile and excellent working actors who love to record with us, and who find the work to be challenging and a wonderful way to experience great dramatic literature and exercise their professional muscles at the same time. Think of it as akin to working out in the gym! We give them the opportunity to do that, and they feel it’s invaluable.” 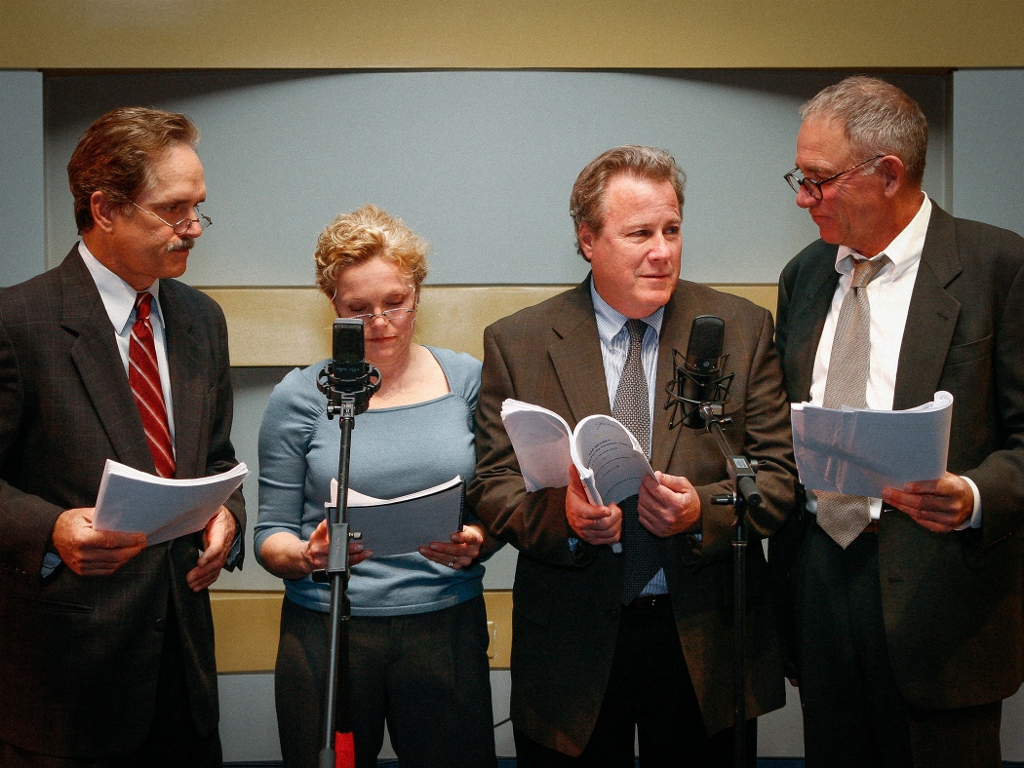 WHAT ARE THE ADVANTAGES OF YOUR RECORDINGS OVER LIVE STAGED THEATER OR AUDIO BOOKS?

“Instead of using several senses, like you do in live theater, you’re just listening. That fires up your imagination. You begin to visualize… it’s really very stimulating. With audio books, you usually have only one person telling the story; with LA Theatre Works, there is a whole cast interpreting the story. It’s a doubly rich experience — the recordings stimulate concentration and imagination. It’s more fulfilling to listen when you want to learn, and it’s a better teaching tool than a film would be. The teachers who use our recordings say that the students learn better. One student said that listening to “Romeo and Juliet” instead of reading it helped him to understand the play for the first time. The head of the Division of Instruction at LAUSD recently remarked about how useful we are in assisting students during the pandemic.”

HOW HAS THE COVID-19 VIRUS IMPACTED LA THEATRE WORKS?

“It’s had a big impact. Every year, we take a play and tour it around the US to 30-40 performing arts centers. We enhance the production values for touring audiences. Everybody is in costume, we don’t use scripts, there is lighting and movement. This year, we were in the middle of a tour of “Seven.” It’s about seven women from seven countries whose actions impacted women and human rights in extraordinary ways. We did a fabulous performance in Palm Beach on March 7, which I had flown in to see; then they flew to Minnesota to do five performances, but they only got through two when it, and the rest of the tour, was cancelled. We had 11 more performances to go. It’s sad, because it was a great show and we lost all the fees from those bookings — a big blow. We also had to cancel our NTLive film screenings and our next live in performance show at UCLA for the month of April, and we are waiting to see what we may have to cancel after that. We are trying to get new dates.”

“But we’re a little more fortunate than most because we still have audio sales and the radio show. We can weather the closures and cancellations. Hopefully, we’ll get aid for the losses on the tour, and maybe we and other nonprofit arts organizations will be eligible for additional governmental and private support.”

DO YOU HAVE ANY FINAL THOUGHTS OR INFORMATION THAT YOU WANT YOUR AUDIENCES TO KNOW?

“Absolutely. We always have the play recordings available for purchase. We also have another group of plays available for free online listening. They’re on scientific themes, and they’re called The Relativity Series — titles like “The Great Tennessee Monkey Trial” about the Scopes trial with the great speeches of Clarence Darrow and William Jennings Bryan. We just recorded “Behind the Sheet.” It’s based on a true story about a doctor in the 19th century who performed experimental gynecological operations on slave women. It was good research, but they didn’t use anesthesia and the women suffered terribly. We have others about autism, DNA, and ethics.” And we just put up a free listen to the late Terrence McNally’s “Lips Together Teeth Apart” starring Kristen Johnston and Steven Weber.

Again, the general public can log onto our website, www.latw.org and find a host of wonderful free and for sale recordings — a great way to help get through this trying time.

October 24, 2017 Stephan Martin Restaurant Reviews 0
Spread the love
Spread the loveAnaheim GardenWalk is home to a plethora of fabulous restaurants and on Sunday, October 22nd, guests were able to experience some of the great flavors that these restaurants offer at the free Chef […]

December 9, 2021 Splash Magazines Contributor Music & Arts 0
Spread the love
Spread the loveWhen it comes to Stephen Sondheim, I have a lot to say’ He will make you a better performer, John Haas tells his musical theatre students Northwestern University has generously shared this story […]