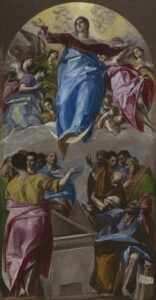 The Assumption of the Virgin Mary

The Art Institute of Chicago grandly re-opened Thursday, July 30th, free for all Chicagoans. Until August 3, the museum is open to all Illinois residents free with reservations made online. There were many Art Institute employees available welcoming patrons on Thursday. They kept the lines moving quickly while making sure masks were properly worn and social distancing was ensured. Members are able to enter one hour earlier than the general public, just like Disney World when you stay in the hotel properties. In fact, members should stop at the membership desk before or after their visit to renew memberships for another five months from expiration dates. The current hours are limited due to Covid-19 restrictions. Public Hours are: Mondays 11:00 a.m.-6:00 p.m. Tuesdays through Wednesdays Closed. Thursdays 1:00-8:00 p.m. and Saturdays and Sundays 10:00-6:00 p.m.

However, do not fret about missing exhibitions while they were closed. The Art Institute has extended many exhibitions including an opportunity to see Ambition and Defiance the first time the Chicago Art Institute has ever featured El Greco and the artist’s first major exhibition in fifteen years. There are over fifty-five paintings and sculptures dedicated to Domenikos Theotokopoulus or as we know him El Greco (literally meaning “The Greek”) .

El Greco was born 1541 in what we now know as Crete, then under Venetian control. He trained to become a traditional Byzantine icon painter, but he had higher aspirations and in 1567 he moved to Venice becoming a friend, admirer and avid follower of the Renaiaance painters: Tiziano Vecellio (Titian), Jacopo Robusti (Tintoretto) and Michelangelo. He included their likenesses in his paintings. Even though, El Greco mastered and then personalized their techniques, his contentious character caused him to criticize the darling of the Italian papal circle Michelanglo’s painting ability. Therefore his ambition to secure papal patronage was undermined by his criticism, ambition to overshadow Michelangelo and his perceived arrogance. For the six years he spent in Rome from 1570 to 1576 he received no church commissions. He survived on commissions for portraits and small-scale devotional paintings.

Without any major patrons or public commissions, El Greco leaves Rome for Spain 1577-1614 where he comes into his own niche showing his business acumen by establishing a commercially successful work shop of painters. He shows a great fondness for Toledo, Spain. His son Jorge Manuel Theotokopoulos is born there in 1578 and eventually becomes part of the workshop. His litigious and uncompromising nature still creates lawsuits over the value of his work. He experiences a lifetime of difficulties through his ambition and defiance.

This exhibition curated by Rebecca J. Long, Patrick G. and Shirley W. Ryan Associate Curator of European Painting and Sculpture before 1750 creates a magnificent retrospective of El Greco’s aesthetic transformation, artistic ability, defiant character and unparalleled ambition. Long specifies, …”while El Greco has traditionally been considered through the lens of religious art, we find that a far more clear view of him can be gained through the lens of patronage. He was a striver. His particular career trajectory and artistic goals have therefore been our focus . . .” This is a fascinating exhibition that takes us inside the personality and genius of El Greco. We behold his bold use of color, three dimensional perspective, expressive emotion evoked by eyes hands and elongated figures with flowing movement. This is a richly rewarding exhibition that all should experience.

Lead support for El Greco: Ambition and Defiance is generously provided by an anonymous donor. Major support is contributed by the Rhoades Fund-Julius Lewis Exhibitions Fund, Shawn M. Donnelley and Christopher M. Kelly, and Margot Levin Schiff and the Harold Schiff Foundation. Additional funding is provided by the Jack and Peggy Crowe Fund, Barbara and James MacGinnitie, the Prince Charitable Trusts, and Penelope and Robert Steiner.

Photos: Courtesy of the Art Institute of Chicago